Waiting for the Four Seasons transit bus at three pickup locations is now more comfortable thanks to a community partnership between Northland Pioneer College welding students and the City of Show Low.

With ridership topping 180,000 per year on the transit system, officials recognized the need for more shelters at bus stops. “When no local businesses were able to fabricate the shelters, city officials approached NPC welding students,” explains Kylie Peck, one of the NPC students involved in the project. “We decided to take on the challenge as part of our SkillsUSA Leadership Project.” 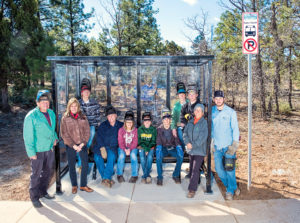 To exactly match existing shelters, students drew the plans,  calculated materials and fabricated the units, volunteering additional hours beyond class assignments. Nearly 60 students were involved in the project, recording over 378-manhours during the three-month process.

While taking measurements of the shelter near the Show Low Police Station, Peck and fellow students chat-ted with senior citizens who used the shelters as a nice, weatherproof place to sit and catch their breath during their morning walks. “We realized the importance of our project, as it would provide critical shelter for seniors and bus riders when local wind chill temperatures dip below zero,” notes Peck.

This is just one of the latest community projects by NPC welding students, who previously worked with metal arts students to create litter containers for Show Low’s downtown area. Welding students also constructed steps to a trailer for the Show Low Animal Shelter. NPC’s  construction students built dog houses that were donated to the Winslow Animal Shelter, as well as built a house in Holbrook, intended for a low-income family.

“NPC wants to be an important part of building up and supporting the communities we serve,” says NPC President Dr. Jeanne Swarthout. “I am proud that several of our programs are able to fulfill local community needs while teaching students the skills necessary to be successful in their future careers. These partnerships create opportunities where everyone benefits: the community, the students and the college.”