Metal Art is more than Armour Back to November 2015

A dancing reflection of sunlight drew University of Arizona history major Howard Noble to a window overlooking a medieval festival on the lawn below. His curiosity led him to join the merriment and change his life forever.

“I had so much fun that I went home, designed and built a suit of armour and was back as a participant a month later,” recalls Noble. He created a second suit for a friend, and was soon taking orders for custom suits and doing repairs.

“I had plans to become a history teacher, but making and repairing armour had soon become a full-time venture. And the pay was much better than I would ever make as a school-teacher! So I quit school, got married, and spent the next 18 years building a business that employed over 20 workers fabricating armour.”

Noble’s interest in history drew him to study the post-Roman to 1580s era. “I respected their code of ethics, the chivalry and code of honor.” Fabricating armour provided an outlet for both his artistic abilities and his love of history.

Noble was actively involved with the Renaissance Faire and Medieval Mayhem communities. His work won numerous honors at county, state and regional competitions. But the 60- to 70-hour weeks became “too much of a good thing,” so in 2000 Noble stepped away to spend more time with his family. It took a concerted nine-month effort by Curtis Casey, former chair of NPC’s Welding department, to lure Noble into sharing his vast knowledge with students starting in 2007.

Now in its eighth year, Noble says NPC’s Metal Arts program is expanding beyond fabricating armour, blades and metal art. “I see Metal Arts as a bridge between traditional welding and the fine arts.” A new small foundry adds the ability to cast bronze art pieces up to 14 inches, “pushing us into sculpture and more contemporary art forms.” Noble loves the classical-traditional Greco-Roman style and now does custom designs and sculptures in his home studio.

The program’s curriculum is growing as well, covering basic metallurgy and blacksmithing. “I expect my ‘Blades’ students to understand the metallurgical science, down to the atomic levels and magnetic properties, before they begin working on that piece of metal.” Instruction also covers etching and soldering techniques.

A typical class begins with Noble reviewing the night’s projects with students before the roar of the forge, pounding of steel upon metal, and the scraping sound of metal against stone fill the room. Students work on individual or group projects creating or repairing armour, poleaxes, various blades and swords, floral sculptures and other artwork, decorative blacksmithing and jewelry. He has divided his students into three separate evening classes, based on skill level and interests. 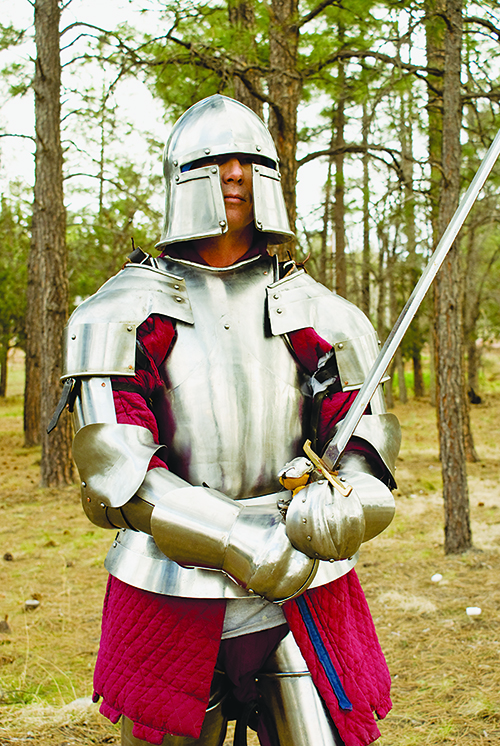 Ready for battle… NPC Metal Arts instructor Howard Noble has taken on the enemy in these replicas he created of a 15th-century Italian suit of plate armour and sword. The quilted gambeson has loops for attaching mail and also reduces chafing caused by the armour. The suit and other metal art pieces by Noble and NPC students, including an ornate archway covered in sculpted trees, flowers and birds, are on display and for sale at Deb Moseman’s Metalwerks and Gallería Eclectia, 1034 Woodland Rd. in Lakeside.

There are career opportunities in the metal arts field. During the summer months, Noble works individually with his advanced students, helping them build portfolios of their work. “One student now makes his living as an armourer. Another is making as much working part-time as an armourer as he does at his ‘regular’ job and is trying to decide whether to make the leap into doing metal art full time,” recounts Noble. “A third has combined his interest in mail with his love for creating some beautiful jewelry pieces into a successful career.”

Noble lives by the quote from Emperor Maximilian II he has on the chalkboard in his classroom: “If a man is not remembered when he is alive, who will remember him after his death.” The pieces of armour he creates, and the student lives he influences are his small imprint on history.

For more information on the Metal Arts program, stop by the shop, 1560 E. Commerce Dr., during Tuesday, Wednesday or Thursday evening classes, or contact Noble at (928) 205-8364.